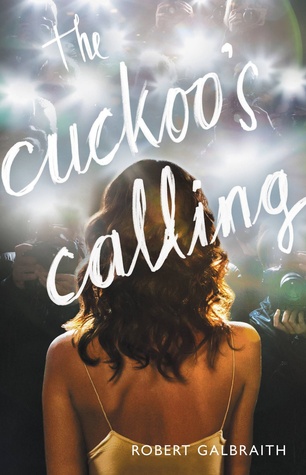 Let's be real. Does anyone NOT know Robert Galbraith is a pen name for J.K. Rowling? Well, it's true. When this book came out a couple of years ago, it was a big media ordeal about who leaked it that she actually wrote it. Being a contrarian, I avoided the book during the fracas because I didn't want to be seen reading the book causing all the annoying media stories. But, now that the secret is old news, I decided to give it a try.

I listened to the book on audio and Robert Glenister, who did the narration, is pretty fantastic and doing different accents.

Cormoran Strike is an amputee veteran of the afghan war, the illegitimate son of a famous rock star, recently parted from his fiancee, and in debt to a shady character. His new temp secretary, Robin, walks into his life the day he takes a new case. John Bristow is the soul remaining child of Sir Alex Bristow and his wife. His sister was Lula Landry, a supermodel who died by falling from her balcony three months before. It was ruled a suicide, but her brother is sure she was murdered and the downstairs neighbor swears she heard a man's voice arguing with Lula just before she fell.

Robin turns out to be a fabulous asset in investigating the case. She is a consummate actress and plays many entertaining roles to gather information. She's my favorite.

As I listened, I found myself stopping to appreciate the language of the book. For example, there was the phrase "jettisoned his dignity". That really caught my attention as an interesting choice of verb. It was very descriptive.

Also, there were several spots that made me chuckle. The book is so tough-guy serious, that it took me by surprise when it was funny.

My only complaint was that the final piece of the puzzle was hidden from the reader. You get all the clues all the way through the book, and then right at the end, he finds the last clue, but it doesn't say what it was! And then, after you find out whodoneit, you do find out what the clue was, and you think to yourself, "Well, that's what I thought it was! Why was that so important that it had to be repressed?" I thought that there must be some huge twist in the last clue, but it was just what I thought it was.

I'm really bad at solving mysteries, but I like to just let it all wash over me and take it in. I make my guesses, but I'm always wrong.

I give this 8 bookmarks, and I'm definitely going to read the next one,