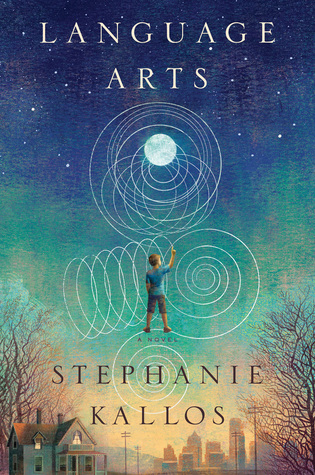 I just finished Language Arts by Stephenie Kallos. It is about a man who teaches at a private school in Seattle. He's been divorced for ten years, his severely autistic son doesn't really like him much, and his daughter just went away to the East Coast to go to college leaving him with his memories of his life (which we get to peek in on) and his empty house. The story is told from the points of view of the man, Charlie, his daughter Emmy, and a nun suffering from dementia who lives in the group home with Charlie's son Cody. Charlie's sections consist of flashbacks and current events. Emmy's are mostly flashbacks and comments on her dad's and Cody's lives.

The nun, Giorgia's sections are the most surreal. She interprets every situation as a "story". Fairy tales, or stories she's made up in her head about herself as a young woman in Italy. Frequently, they include her sister and father. She responds to everything as if it is a part of her story.

This novel is slow-paced and lyrical. Charlie is somewhat of a slacker in juxtaposition to his over-planner ex-wife. He seems to be just sort of drifting through life, until his daughter's exit propels him to a drunken expedition into the storage boxes in the crawl space of his house. What he finds there provokes memories of his childhood and his fourth grade teacher and the mentally disabled boy in his class, as well as memories of his life with his wife and children.

My only complaint is that some chapters are all told from one character's point of view, and some chapters change points of view in several places with no warning. It made it a little disjointed. It seemed that there was something missing before the last chapter. It was a beautiful ending, but I felt like it needed a little more support.

I received this book in ebook format from Netgalley.com.