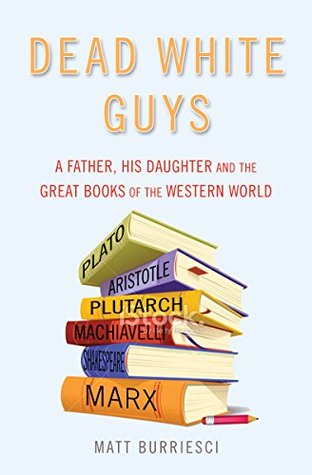 Matt Burriesci is the Executive Director of Pen/Faulkner which is the largest peer-juried prize for fiction according to Goodreads. So he knows his literary stuff. And he shows off that knowledge in Dead White Guys.

The blurb says this is a defense of teaching Great Books in high school and college class rooms, which has been up for some debate recently. I find the book is definitely supportive of classic literature, but the question of whether or not to teach them in schools doesn't really seem to come up. I think I know where he would stand on the issue, but it's not directly mentioned.

I know that the authors don't get a say in what goes on the jacket copy of their books, so I won't fault the book for the fact that I did go into the book thinking it was something different from what it actually is. Once I realized I had been deceived, and got a grasp of what I was actually reading, I took a deep breath, and realigned my expectations. It became a much more pleasant experience after that.

Confession, I have never been a huge fan of classic literature. I always found holes in Socrates' theories when we read that in school. I figured I just didn't understand. This is a nearly painless way to glean some understanding of these works.

The book is written as a letter to the author's five year old daughter. She is not supposed to read it until she is eighteen years old. It is peppered with asides about what the world is like now, and speculation about what it will be like in thirteen years. While I enjoy these digressions, it is a little jarring to be reading along about what life was like in ancient Rome, and then be jolted out of the narrative by a reminder that this book isn't actually for the reader. It feels a little uncomfortable, like reading someone else's email.

Burriesci's tone is confidential and intimate. He clearly doesn't think much of the way the world is going. On the other hand, he seems to think it hasn't really changed all that much either. Which is why these works are still relevant.

Read Dead White Guys if you want a basic breakdown of 26 works of the canon. But know going in that it is not a book about keeping the canon in the classroom.

Received from Netgalley.com in exchange for an honest review.