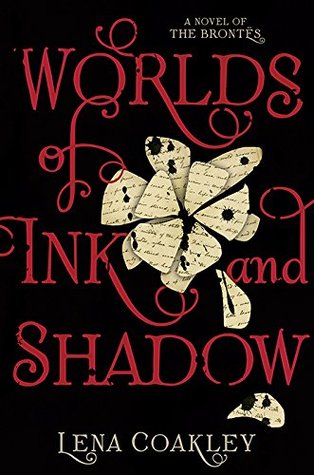 I was drawn to this book by the description "A Novel of the Brontes". Yes, I am a sucker for all things Victorian, and the Brontes in particular. And can we talk about that cover? That may have had something to do with my attraction.

This is a YA novel about the four Bronte siblings as teenagers. Well, the ones that lived to adulthood, anyway. But Maria and Elizabeth have their own roles to play in this story.

Charlotte and Branwell have found a way to enter into the world of the stories they write. They share the world of Verdopolis and write many stories about their favorite characters. Emily and Anne feel left out because they used to be invited into the world, but for several years, Charlotte and Branwell have refused to take them. In a fit of pique, Emily leaves one of Charlotte's pages out where their father can find it. When he confronts her at the dinner table, she vows never to go back to that world and to write no more stories. Branwell convinces her to go back one last time to end the world and all the stories, and then it all goes haywire from there.

At first, I thought this was going to be an angsty take on the Bronte siblings. After reading the first couple of chapters, I had an idea that there might be fairies involved, which wouldn't be entirely unheard of in their neck of the woods. It turned out to be much more interesting than that. When Charlotte declares she is done with writing, it gets intriguing. I was sitting on the couch and I didn't get up to go to bed until I was finished with the book.

The characters match what I picture them to have been like. Charlotte is the teacherly eldest sister. Branwell is a spoiled brat. Emily is emotional and unconcerned with rules. Anne is sweet, but smart.

All in all, I ended up really enjoying this book. I couldn't decide if the fake ink blots on the page were cute or annoying. They were the same on every single page, except for the chapter starts. They weren't distracting really, and the quality of the paper pretty much made up for it.

It took a bit to get moving, but I flew through after the first quarter.